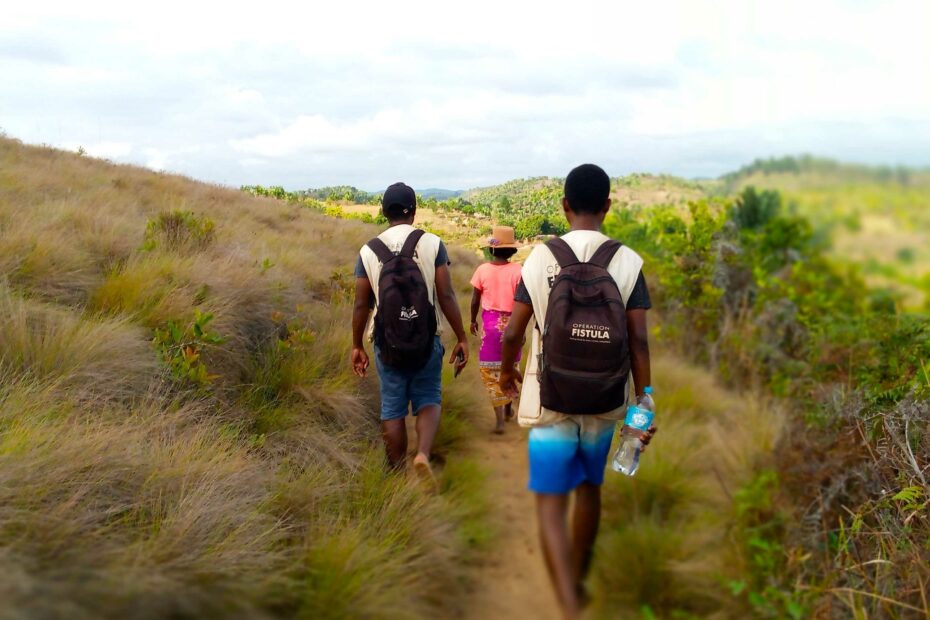 “When asked about snakebite statistics in Brazil, scientist Maurício Rocha e Silva once said there were none,” Deirdre Mask writes in her 2020 book The Address Book: What Street Addresses Reveal About Identity, Race, Wealth, and Power. The scientist explained his logic: “Where there are snakes, there are no statistics; and where there are statistics, there are no snakes.”
Rocha e Silva’s pointed comment on discrepancies within the quality of available public health data could equally be applied to the discussion of obstetric fistula.
In the United States, we have excellent statistics on fistula prevalence among American women. In short, there is none.* In Madagascar, there is plenty, but even a rough estimate might miss the mark by tens of thousands.
Where there is fistula, there are no statistics; and where there are statistics, there is no fistula.
Fistula happens in places that are quite literally off the map.
Mapping as data collection
When Operation Fistula opened its Madagascar office in 2019, we knew we would need more sophisticated tools for locating potential patients.
Madagascar is roughly the size of Texas, and more than 60 percent of the Malagasy population lives in the country’s expansive rural regions. The more isolated a place is, the more likely we were to find women living with fistula — women who might not even be aware treatment exists, let alone have the means to access it.
But there was a problem: demographic maps of Madagascar were full of holes. Entire populations existed far from paved roads, in dwellings that were invisible on official government documents.
Satellite images of the regions we were targeting revealed distinct clusters of buildings. We knew that there were entire villages left unnamed and unrecognized — communities that could only be described in relation to other landmarks.
If our goal was to eliminate fistula in a particular place, a basic prerequisite is that we need to know what the place is called. And it’s hard to go door to door in search of patients if you have no idea where all the houses are located.
Or, as OpFistula’s CEO Seth Cochran put it, “It’s like looking for a needle in a haystack, and you don’t even know where the haystacks are.”
Our strategy in Madagascar is built around geography. We’re going village to village — or in mapping unit terms, square by square — attempting to find every woman in need of fistula repair. By chipping away at the backlog of patients in need of care, and helping communities understand how fistula can be prevented and treated, we are aiming to create “green zones” on the map — places that are entirely fistula-free.
A challenge to this plan is that fistula projects are historically and notoriously hampered by a severe lack of data. As noted in the anecdote on snake bites and statistics in Brazil, if you are engaging with a population that is underserved and undercounted, you likely lack even a rudimentary database from which to build a good prevalence estimate: how many patients are there? where are they? how far do they live from a health center? what correlating patterns are visible?
Building new maps to guide community engagement is the methodical approach we hope will produce the concrete, reliable statistics so many projects crave.
Maps and addresses: a brief history
In 2021, it is almost inconceivable to think of pulling up Google Maps for directions, only to be met with an unmarked canvas.
Today, most people who live in cities don’t give a second thought to the notion of having an address. It is a basic function of our identity — part of a formal way for our governments to acknowledge us as citizens. We rarely think in such terms, but our addresses give us access to water, electricity, banking, money-borrowing, voting rights, and legal documents that open doors in all sorts of life-changing ways.
Though maps and city planning have been around for ages, formal addresses are relatively modern. A 2012 white paper assembled by the Universal Postal Union (UPU), a specialized agency of the United Nations, traced the evolution of street naming and house numbering, noting that different societies developed different systems at different times, to meet needs as they arose.
“Descriptions that provide the means to locate and reach destinations have always existed in one form or another,” the authors wrote. “Since antiquity, descriptive addresses have helped people to orient themselves through references to major roads, landmarks, marketplaces and religious buildings.” As societies expanded in both size and complexity, however, high-level functionality became dependent on more complete mapping. The need for precise knowledge pushed societies to develop formal systems.
To take western Europe as an example, the UPU reported that road names and building numbers were officially implemented and recognized in cities in the 19th century. It wasn’t until the latter half of the 20th century, however — well within the lifetimes of many Europeans living today — that that practice was extended to rural communities.
Population growth worldwide has also contributed to the need for formal systems. In the past, when communities were smaller and more tight-knit, creative addressing often got the job done one way or another.
Researching the history of the UK’s Royal Mail for her book gave Deirdre Mask insight into the colorful phrasings that were once used to deliver a letter into the hands of the intended recipient. She shared her favorite:

To my sister Jean,

She has a wooden leg. 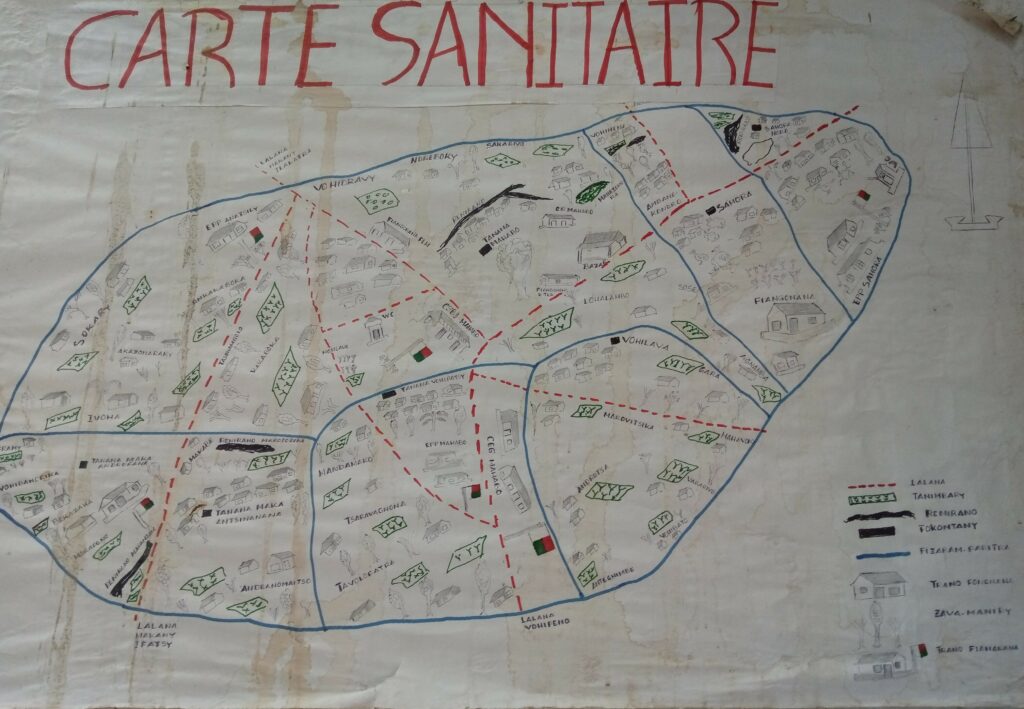 Above are two examples of the hand-drawn maps typically found at the community level in Madagascar.

“You are here”
Earlier this year, Dolly accompanied some of our field staff on a mission to Ambalabe, a commune in the SAVA region. He was working with Rova Ralaindimby, our Community Engagement Coordinator, to test a model for verifying whether we felt confident that we’d found all the patients in need of help in these fokontany.
After a couple weeks of testing his own mapping efforts, and armed with a trove of data, it was time to head back to Tana. But before he left, Dolly had an idea.
“We realized that this was a big occasion — making a place fistula-free,” Dolly said. He knew that most people in Ambalabe would never have seen anything but a hand-drawn map of their community — nevermind such a complete rendering, where each home was visible.
He and Rova decided that to celebrate the accomplishment of the community coming together to end fistula, the community members themselves should be able to hold in their hands a print-out of the detailed map produced by his team. It would be a way to show: You are here — and in all this place, there is no fistula.
The maps were an instant hit. “The local leaders had never seen anything quite like it,” Dolly said.

*To say that there is no fistula in the United States is an oversimplification. Fistula has been a consequence of childbirth for as long as women have been having babies. The vast majority of women who give birth in high-income countries, however, do so while under professional medical care, and thus do not experience the days-long, unsupervised labor that most of our patients endure. Because of these enormous disparities, most fistula organizations focus on fistula in low-income countries.

Our mapping work wouldn’t be possible without the support from our phenomenal partners at Mapbox and Thinking Machines. Their technology enables us to track Operation Fistula’s work in OSM, and also to see the progress that has been made in OSM across Madagascar. In the images above, you can see the huge strides made in the mapping of Madagascar over the two years that the OpFistula mappers have been active, and where they have focused their efforts: Vatovavy, Fitovinany, and SAVA.