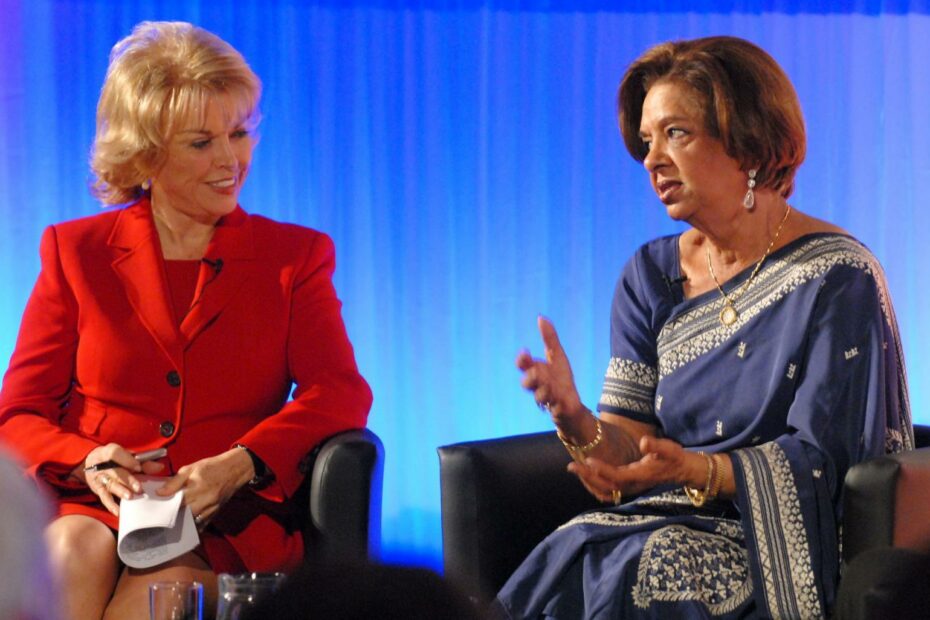 It was at the Skoll World Forum in Oxford. I was at the conference because I had just quit my corporate job to devote all my time to helping women with obstetric fistula. Dr. Nafis Sadik was on a panel discussion with Pat Mitchell, Karen Tse, and Jody Williams in the Sheldonian Theatre. The whole conversation was remarkable, but I hung on every word Dr. Sadik spoke. I had been around very powerful people in my professional life, but I had never seen anyone like her.

I racked my brain thinking of how I could meet her, but had no ideas. As the talk ended and people started to disburse, I felt myself jumping over rows of seats to try and get onto the stage. But I was already too late. Once on the stage, there were people surrounding her and I was at the far end of the crowd. I felt deflated, but determined.

She must have sensed something, because our eyes met for an instant as she looked at the crowd around her. As her gaze continued on, I involuntarily barked out a rough “Obstetric Fistula!” Dr. Sadik’s eyes immediately snapped back to mine. With a tilt of her head, she beckoned further explanation. Across the crowd between us, I yelled out, “I’m leaving business to start an obstetric fistula charity.”

With that, Dr. Sadik raised both her hands up above the crowd towards me and I started to move toward her. Once our hands connected, she started to pull me towards her through the parting sea of people. When I was finally in front of her, Dr. Sadik looked directly into my eyes and said, “Tell me more.”

I explained my idea and why I wanted to do it. Dr. Sadik was immediately supportive. After a minute of explanation, her eyes still locked to mine, she said, “What you’re doing is good. I want to help. Give me your card.” My heart rocketed into the sky with excitement – this was the greatest opportunity I had ever had.

But, almost instantaneously, I started thinking of all the ways I might never hear from her. “Dr. Sadik, I am very grateful for your support, but I intend to follow up. Can I get your card?” She looked at me for a few long seconds, then smiled wryly and motioned with her hands to show her beautiful blue sari. She chuckled and said, “I don’t have a card.”

Panic. All those reasons why I might never hear from her again became even more real. Without thinking, I said, “That’s ok. I have a spare card and he has a pen.” I took out a card and borrowed a stranger’s pen. “Can you give me your number?” She laughed again and wrote down her number.

Dr. Sadik became my oracle and Operation Fistula’s first board member. She turned my pure intent into our structured purpose. I knew nothing about health or Africa, so she connected me to incredible people who she had mentored over the years who could help shape the vision (Dr. Andrew Arkutu and Dr. France Donnay). I met with Dr. Sadik every time I was in NY and she would guide the journey with advice and wisdom.

She believed in me way before I believed in myself. Her confidence became a driving force for me – a gift that I didn’t necessarily deserve, but one that I could work hard to earn.

In the years since that meeting, Operation Fistula has pioneered a new way of funding surgery and has gone on to help thousands of women as we have scaled this innovative financing model across 22 countries. We signed a partnership late last year with UNFPA to scale the model to 60 countries over the next 5 years, and are growing faster than we could have ever dreamed. And all of it started with Dr. Sadik in that moment on the stage in Oxford.

Dr. Sadik’s belief in Operation Fistula made it concrete. She made the dream truly possible.

I just found out yesterday that Dr. Sadik passed away this week at the age of 92. In a beautifully penned obituary by Edith Lederer published in the Washington Post, Dr. Sadik’s son Omar said of his mother:

“She transcended age and time and was as equally beloved by people much older than her, as she was by tiny little children — because they recognized her heart. She fit more into one day, than most of us do probably in one year — she was incomparable and she was unmatched.“

Truer words could not be written. I am deeply thankful for all Dr. Nafis Sadik has given to me. I wish I could have communicated to her just how much her mentorship meant to me and to the women we serve.

I hope other global leaders can follow Dr. Sadik’s lead and see the power of sharing a bit of their enormous gravitas with some tiny little person who has a dream. That gift can fundamentally change the world.

Join us as we continue to drive progress towards our mission, and work for a fistula-free future! Follow us on Instagram, Twitter, and LinkedIn to stay in touch with all our news and updates.